Experience a cultural trek in which you can learn about one of Nepal’s Tibetan-influenced culutures and tribes. Stay in a local homestay in Briddim, to learn more about the Tamang people and their way of life and enjoy spectacular views of mountains including Ganesh Himal, Langtang and Gosainkund range.

Tamang Heritage Trail Trekking in Langtang region is newly open  tea house trekking in Nepal. The route exposes a unique ethnic culture that’s found within the Tamang community in this area who traces their roots to Tibet & follows mystical customs & traditions of yore; this community has lived most of their lives based on ancient superstitions that are as old as these mountains. The trail, relatively new, was said to have been discovered by an inquisitive trekker who lost his way & stumbled on this route, & discovered these Tamang settlements, who till this time, had hardly seen any tourists & live within a culture literally untouched or influenced by westernization.

This venture is a charming outing that presents some fantastic mountain views, snowy alpine territory, green meadows & lush rhododendron forest which gives us the experience of a vacation in the wilderness within the shortest possible time, & ever so close to the ancient capital of Kathmandu. As we clamber into Tamang villages, we get upfront opportunities to watch close-up the lifestyles, culture and crafts such as bamboo baskets and mats for which this place is well known.

The Tamang Heritage Trail trek also gives us the pleasant view of mountain such as  Langtang Lirung (7245m), Langtang Kerung, Chumse Danda ridge (5122m), Dorje Lakpa (6989m), Jugal Himal, Ganesh Himal, Paldor peak, Shringi Himal, Manaslu and Sanjen Himal ranges. Glaciers of different shapes and high altitude lakes namely: Gosiankunda, Parvatikunda, Bhairavkunda and Dudhkunda are a part of this astonishing Heritage trek that is related to a very interesting community that awakens our own traditions to a world familiar to us, but yet unknown to some of our own fellow beings. This trek will make up a wonderful holiday that will be longer in the memory of a life time. Experience the wonder of the himalayas like a local with mount trails.

The best seasons to do the Tamang Heritage Trail are spring (March-May) and autumn (September-November). Because the altitudes on this trek aren’t especially high, it is also a comfortable trek for the winter, and views are likely to be good at this time. Just bring some warm layers with you during the winter pre winter and post winter season too.

Day 1Drive from Kathmandu to Syabrubesi (1467m.) via Trishuli (Nuwakot) about 7 hours drive

Drive from Kathmandu through scenic foothills and ridge line vistas to Syabrubesi passing through Dhunche. While passing along the road at the bank of Trishuli River you catch a glimpse of Ganesh Himal, terraces and green hills. As you pass through Dhunche you feel as if you are heading towards deep land. At the same time, you notice that the road after Betrawati is still under some construction than arrive in syabrubensi where we overnight.
Accommodation: Mountain Lodge
Included Meal: Breakfast, Lunch and Dinner
Transport: Local bus or Shared Jeep
Escorted by: Guide

After breakfast we regulate our journey to next cam, we can experience some of the Tamang culture by interacting with the local folks. we can see scenery from view points especially as you walk through a local village. The cultural show at Goljung and Gatlang makes your trekking a memorable one. Gatlang set high on a hillock among terraced fields is a Tamang settlement. One can visit a Tamang monastery and beautiful Parvatikunda Lake at Gatlang. Stay overnight in local lodge.
Accommodation: Mountain Lodge
Included Meal: Breakfast, Lunch and Dinner
Escorted by: Guide

Day 3Trek from Gatlang to Tatopani (2607m.) which takes about 6 hours.

After breakfast, we start our trek . On the way you enjoy the sightseeing of Langtang range and Ganesh Himal. At Tatopani which naturally produces ‘hot water', you can take a hot bath in natural hot springs with bathing areas right in the laps of the mountains. It is believed that taking a dip in this spring will heal you from your aches and pains. This day's trekking provides you an opportunity to experience some important facets of the Tamang culture. Overnight in local mountain lodge.
Accommodation: Mountain Lodge
Included Meal: Breakfast, Lunch and Dinner
Escorted by: Guide

After early breakfast we start our day as other days. En route you may encounter animals like monkeys and deer. The panoramic view of Langtang, Kerung, Ganesh Himal and Sanjen ranges can be distinctly experienced from Nagthali. Nagthali used to be a popular meditation center for the local monks and priests. Another cultural village, Thuman, is popular for its Shamanic performances and beautiful views of Langtang. Beautiful views of the mountains can be seen from every house in the village of wonderful Thuman. Stay overnight in local lodge.
Accommodation: Mountain Lodge
Included Meal: Breakfast, Lunch and Dinner
Escorted by: Guide

We trek from Thuman to Timure you can visit nearby historical Rasuwagadi. Today’s hiking grants you an opportunity to observe Tibeto Burman Tamang culture in two of the villages on the way. Timure is on the old trade route to Tibet. A fort here is a historical reminder of the Nepal Tibetan relations that have existed for many centuries. A suspension bridge here links Nepal and Tibet. Stay overnight in local lodge.
Accommodation: Mountain Lodge
Included Meal: Breakfast, Lunch and Dinner
Escorted by: Guide

Day 6Trek from Timure to Briddim (2229m.) and we reckon this will take about 6 hours.

we Trek from Timure to Briddim after breakfast. You can experience the village life of Briddim and enjoy a cultural show performed by community members. You can also experience a home stay and Tamang culture right to its roots. To mention a little about Briddim, it is a Tibetan Buddhist village in the bosom of Langtang Himal. Around 43 houses are spread in a Z shape. Most of the houses are made up of stone and have roofs of split shake. As direct descendants of ancient Tibetan immigrants, the culture and tradition of Briddim closely resembles that of Tibetan villages. Stay overnight in local lodge.
Accommodation: Mountain Lodge
Included Meal: Breakfast, Lunch and Dinner
Escorted by: Guide

we trek from Briddim to Syabrubesi via Wangel. This day the trail moves along a gently descending path passing through villages, terraces and magnificent views of surrounding hills that look beautiful in the fading sunlight. Stay overnight in local lodge.
Accommodation: Mountain Lodge
Included Meal: Breakfast, Lunch and Dinner
Escorted by: Guide

Day 8Drive from Syabrubesi to Kathmandu and this takes about 7 hours.

After breakfast we take a pleasant drive back to Kathmandu with splendid views of hills, mountains, terraces and vibrant colorful villages. You drive along an unpaved road until Betrawati where you will begin to follow a narrow, but well paved road, till you reach Kathmandu city.
Accommodation: Deluxe hotel basis with breakfast
Included Meal: Breakfast and Lunch
Escorted by: Guide
Transport: Local Bus or Shared jeep as per group size. 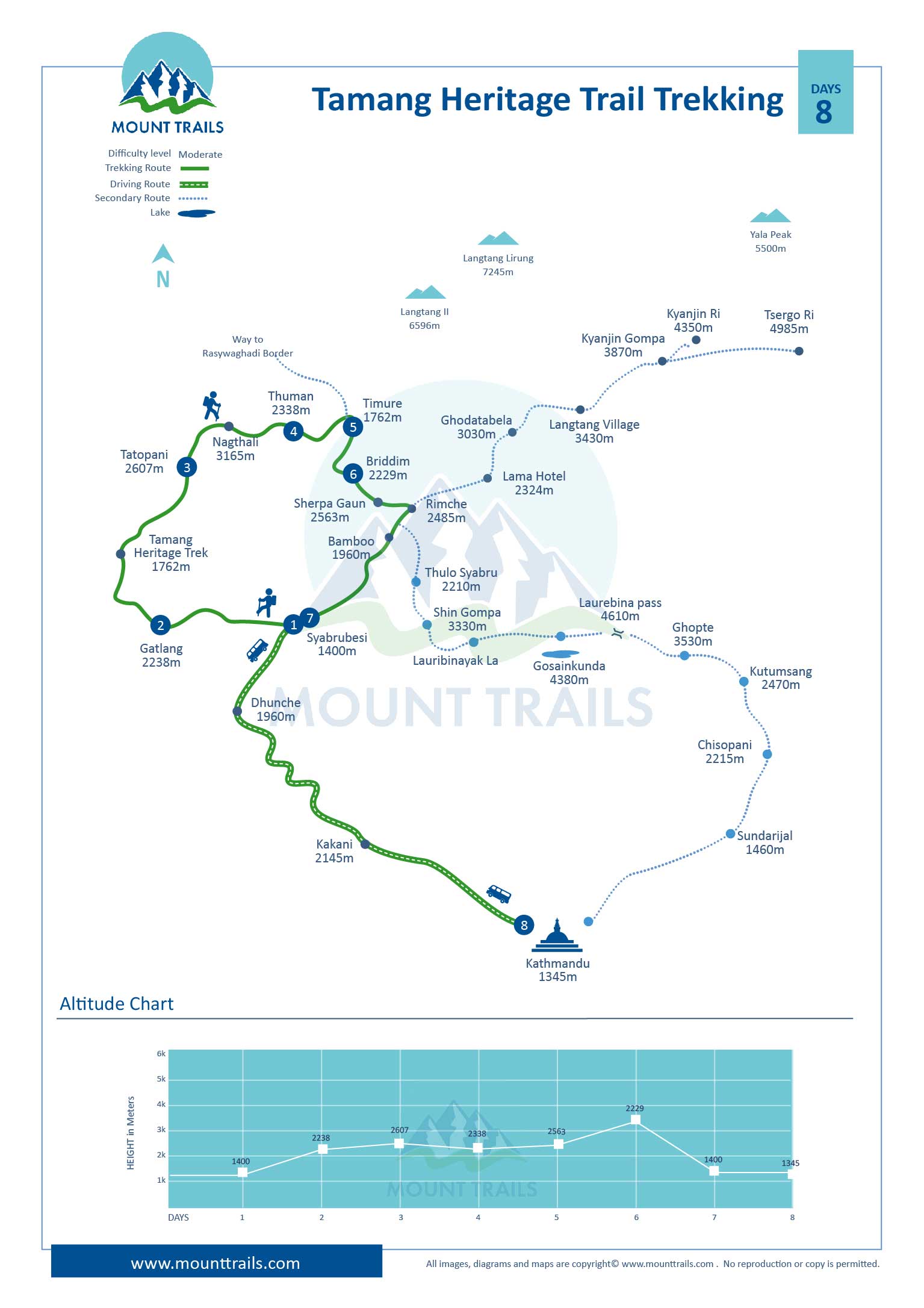 Eating is a big part of Holiday. Travelling with Mount Trails , you experience the vast array of wonderful local  fresh Nepalese , Chinese, Continental, Italian and several local cuisines. Breakfast, Lunch & Dinner are included in the package. Your guide will suggest delicious, hygienic and each place special food during your trip. Mountain restaurant owner prefer not to order many dishes and waste food as they would like to cater more trekkers with limited food before run off stuck. Its a week or more days hard work to porters and caravans to bring food to these places. During this trek you will usually have breakfast and dinner at the same Lodge, lunch will be eaten at one of the trail side restaurants en-route.

A Local Tea House is the combination of guest house in Himalayas, restaurant. Private rooms are available in most Tea Houses, except for high altitudes ones where it will be just dormitories. The lodges are fairly basic and the rooms are spare with twin beds and very little additional furniture. Blankets are generally provided at the local lodge. There is a large dining room-cum-lounge, warmed by the bukhara stove (an iron cylinder, fitted with a chimney duct, in which a log fire is lighted. There is normally no electric lighting in the rooms unless the village has hydroelectric power. The dining room usually hassolar lighting. Most teahouses now also have electricity for charging mobile phones and cameras and it will be extra chargech which will be minimun

Mount Trails provides unlimited chlorine/Iodine treated water during the trek. All tea houses have mineral water and boiled water for trekkers upon additional cost. We discourage the purchase of Mineral water and bottled water while on the Trek as plastic bottles aredifficult to dispose off and have become an environmental problem

Mount TrailsnTrekking and adventures offers you complementary route map of the trekking region.

This is a very active trip, meaning you will be on the move most of the time, so pack as lightly as possible. We provide one porter for every two travellers; your trekking gear will be carried by the porter in a duffel bag that we will provide. The maximum the porters are allowed to carry max 20 kgs between 2 trekkers . Unnecessary luggage can leave in Kathmandu Hotel and its absolutely no additional charges.

If above program itinerary that don't suit to you and wish to modify above itinerary then please let us know, we would be so much happy to create a tailor made itinerary as per your time and interest. It is also possible to combines above trip with Jungle safari, rafting, Mountain flight or with any other travel plans in Nepal, Tibet and Bhutan. Mount Trails expert trek tour operator will design and arrange your holiday as per your time length and interest.

We accommodate our group at the prestigious accommodation in the heart of the city. We will have a tourist standard hotel to luxury hotel where we can get to experience a touch of history combined with luxury and is an excellent place to relax before and after the trek in himalayas.

Accommodation in mountain will be a basis accommodation which is establishments owned and run by local called simple mountain lodges. We use only quality lodges, which offer twin room accommodation and have comfortable dining rooms often decorated with traditional art and textiles. Accommodation in mountain do have simple shower rooms, please note that these will not necessarily be of a Western or even Kathmandu standard and that some facilities up in the himalayas. we take for granted such as en-suite bathrooms simply do not exist in many places.

We offer dedicated service with a personal touch. We offer best experience in tailor made adventure treks with the highest…

Tell us about your adventure